Jack Casady is currently touring with Hot Tuna in support of their album, Steady As She Goes

Hot Tuna remains one of the most innovative Rock and Roll bands in American music. Steady As she Goes was recorded at Levon Helm’s studio and produced by Grammy-winning producer Larry Campbell, and captures the energy of Hot Tuna’s live performances. Jack, along with band mate Jorma Kaukonen team up with Barry Mitterhoff on mandolin, Skoota Warner on drums as well as Larry Campbell on guitar, fiddle, organ and vocals to deliver an absolute masterpiece. It takes you back to the days of hard driving rock and roll. With soon to be classic rock songs like “Morning Interrupted”, “A Little Faster” and “Angel of Darkness” Steady As She Goes is sure to be an instant fan favorite. 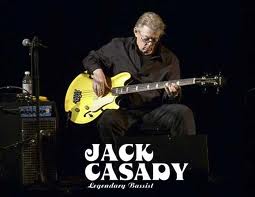 As a Founding member of the Jefferson Airplane and Hot Tuna, Casady’s full driving tone and innovative melodic bass work has defined the role of bass guitar in Rock and Roll for decades. Liberating the bass from its traditional role as part of the rhythm section, Jack s pioneering approach has brought the instrument to the forefront. With sweeping chords and stormy melodic lines Jack’s bass distinguished not only Jefferson Airplane and Hot Tuna but also a variety of side projects and recordings with artists including Jimi Hendrix, David Crosby, Warren Zevon, Country Joe and The Fish, SVT, Rusted Root and Gov’t Mule.

“The main issue is I love to play the bass guitar,” says Jack. “The craftwork in really learning the subtleties of the instrument is a lifelong project.”

Growing up in D.C. in the ’50s, Casady was exposed to music at an early age. “Washington D.C. was a wonderful place to grow up because it was the crossroads of so many styles — rhythm ‘n’ blues, blues, country music and bluegrass coming through the Appalachians. And all of those things could be heard at the local clubs. At the same time, I had the opportunity to hear classical music being performed at the famed Constitution Hall. So all of those influences were mixed together. One night I’d be down at the Howard Theater seeing Ray Charles, the next night I would be at the Shamrock Tavern in Georgetown hearing Mac Weisman, Lester Flatt and Earl Scruggs among other bluegrass people. And the next night it would be jazz — people like Eric Dolphy and Roland Kirk. Plus, we had the Library of Congress nearby. You could go down there and lock yourself in a room and listen to Alan Lomax field recordings or listen to music of the rainforest or whatever. So I was really just a sponge soaking up a lot of this stuff. For me, music was the great escape.”

Jack’s first instrument was a Washburn nylon string guitar he had found in the attic of his parents’ house shortly before Christmas of 1956. As he recalls, “When I found that guitar up there in the attic I started plunking around on it, even though it only had four strings. On Christmas Day I noticed an envelope for me on the tree. I opened it up and it read, ‘this entitles you to 12 guitar lessons.’ So that basically started me off on my career.” Selling newspapers and cutting lawns Jack saved up enough money to buy his first electric guitar a ’58 Fender Telecaster and he and his father built his first amplifier at home from a kit. “We set up every night after dinner,” he remembers “and built the whole thing from scratch on the dining room table.” 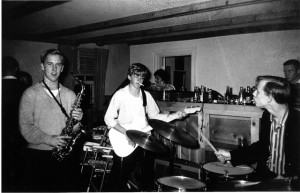 When he was 14, Jack met Jorma Kaukonen, a budding neighborhood guitarist who was a few years older. “Jorma was in high school and came over to visit my older brother. By that time I had my guitar and a thriving blues and R&B record collection and we struck up a friendship and ended up playing a little together, just doing covers of current Buddy Holly and Gene Vincent songs. By 1959, Jack and Jorma had formed a garage band called The Triumphs. As Jack recalls, “I played lead guitar, Jorma played rhythm guitar and sang. The PA system was a Wollensac tape recorder put in the monitor mode so Jorma’s vocals were coming through a 3-inch speaker. It was kind of raw but it was fun while it lasted.”

The following year, Jorma graduated from high school and went to Antioch College, where his interest in folk music deepened and his fingerpicking chops blossomed. Jack continued working with various cover bands around the D.C. area. A call to fill in for a bass player on a gig proved a key turning point in Jack’s life. “As soon as I started playing bass my work quota expanded tremendously,” he recalls. “And I started falling in love with the instrument. There was just a certain sound, that register of the bass and also the higher register of the bass which is kind of going into the cello range that I really was attracted to.”

With the aid of a forged ID, made on Jorma’s grandfather’s copy machine, a 16 year old Casady began working at various clubs around the D.C. area and along the New Jersey shore. It was a great education and an interesting time for me being that young and yet being in what was considered an adult world. I’d go back to high school in the morning after spending all night playing in some club backing up Little Anthony and The Imperials.” By 1964, Beatlesmania was starting to come on strong in the States, suddenly shifting the nature of the club scene and greatly affecting working musicians. “I was kind of discouraged by it all,” says Jack in retrospect. “I would still play with bands on weekends and things like that. But at that point I was kind of lost.”

Then in September of 1965, Casady received a fateful call from his old friend Jorma Kaukonen, who had transferred from Antioch College to Santa Clare University in San Francisco and became immersed in a new music scene developing there. As Jack recalls, “Jorma told me he had joined a band called Jefferson Airplane and I kind of laughed at the name. He asked me what I was doing and seemed surprised to hear that I was playing the bass. Then he says, ‘Wait a minute. I’ve got a bass player in this band that I’m not fond of. It’s not working out, in my opinion.’ So then he says, ‘Let me call you back.’ A few minutes later he calls back and says, ‘We got this band. We got a manager. And the manager promises to pay us $50 a week whether we “work or not.” ‘ And I said, You’re on!’” 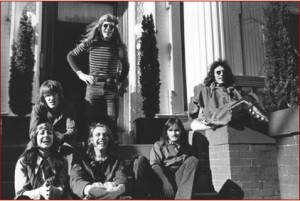 Jack quit college in the middle of October of ’65 and came out to San Francisco to join the Jefferson Airplane. “And there began my career in earnest,” says the bassist who became renowned for the inventive, melodic lines he contributed during his seven-year tenure with the band. “What was great for me was the opportunity of coming to San Francisco in that environment in the mid ’60s where you had a tremendous number of middle class white kids trying desperately to do anything their parents didn’t. And all these kids were suddenly out there playing instruments, making up songs. And that whole coming together aspect created some different music, most of it not keeping up to professional polish of other areas of the country, but still, people wanted to make their own statement. And so I found myself in this band that I thought was the craziest band I had ever seen.”

The band’s debut for RCA, Jefferson Airplane Takes Off, was recorded in February of ’66 and released in August of that year. “It had somewhat of a local success,” explains Jack. “It was the material that we had been playing as a group around the Bay area for a while. We recorded it on 3-track, all pretty much live performances.”

When the original singer Signe Anderson left the band to have a baby, it was Jack who convinced Grace Slick, then performing with her own band the Great Society, to join the group. The roster complete, Jefferson Airplane rocketed to superstardom in 1967 on the initial strength of their hits “Somebody To Love” and “White Rabbit,” making them a cornerstone of San Francisco’s burgeoning rock scene. Jack’s ground-breaking basswork was a highlight of Surrealistic Pillow, the Airplane’s 1967 breakthrough album. “That album was really a unique statement,” says Casady in retrospect. “There were a lot of different styles of songs contributed by everybody, including an instrumental acoustic fingerpicking original tune by Jorma called ‘Embryonic Journey.’ It was quite an eclectic album and I think it still holds up today.” Jefferson Airplane subsequently released a string of acclaimed recordings –After Bathing At Baxter’s (late ’67), Crown of Creation (’68), the live Bless Its Pointed Little Head (’69), Volunteers (’70), Bark (’71), Long John Silver (’72) and the live Thirty Seconds Over Winterland (1973). The band was inducted into the Rock and Roll Hall of Fame in 1995. 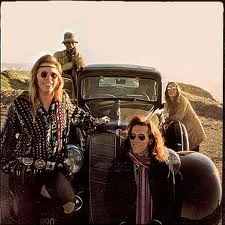 In 1970, Casady and Kaukonen found time between Airplane gigs to put together another uniquely named aggregation, the blues-influenced Hot Tuna. “We formed Hot Tuna basically because we were young and had endless energy,” says Casady, “and there was so much material going into the Airplane from everybody it ended up that you’d only get a couple of songs per session. And also we wanted to play a style of music that wasn’t being played by the Airplane. And we kept that up along with Jefferson Airplane up until ’72, when we decided it was too much to continue the Airplane.”

Hot Tuna shows are an opportunity to witness two lifelong friends coming together to make extraordinary music. “I can’t remember having so much fun,” says Casady, “but also musically being so in touch and in the moment with the music as I am now; where every minute, every note counts on stage. And I find it really unique that I have a situation with a partner of 42 years now where we can just really enjoy the craft of making music together.”

Jack’s devotion to the music and his desire to encourage the development of other players is witnessed in his involvement with Jorma’s Fur Peace Ranch Guitar Camp where he often teaches. His range from the basics of students will learn the skill of “walking” the bass line to Master classes where students address meter, note placement, and arrangement ideas. Jack’s classes are always in demand.

Always a craftsman with his tools, Jack developed his own unique equipment design in his quest for the perfect tone. The engineers at Epiphone Guitars helped him develop the Jack Casady Signature Bass. “Epiphone and I designed this bass to my exact specifications, certainly a dream come true. I feel we really created a comfortable bass that carries a great, warm tone, and is a lot of fun to play! And it also looks great.” This hollow body electric bass features a single Humbucker pickup that packs a whollop. Specifically released to the public by Epiphone in 1998 with critical acclaim.

Find an Epiphone Dealer near you!

Jack’s other projects have included performing music scored by Mark Isham for the major Disney film Moonlight Mile. Jack and Jorma provided about 20 minutes of the soundtrack for the film written, and directed by Brad Silberling and starring Susan Sarandon, Dustin Hoffman, Holly Hunter and Jake Gyllenhaal.

With the release of his solo CD, Dream Factor, Jack Casady opened a new chapter in his ever evolving career. Dream Factor features 11 songs and an impressive cast of collaborators. Joined by Paul Barrare, Ivan Neville, Jorma Kaukonen, Warren Haynes, Box Set, Fee Waybill and Doyle Bramhall II among others, Jack showcases his signature sound in a variety of settings, traveling through blues, rock, country, folk, funk, R&B and soul influences on the disc’s eleven tracks.